Remember Samantha Fox? She rose to fame in England after her mother allowed racy photos of her to appear on Page 3 of The Sun. She was only around five feet in height, but she had boobs that looked like zeppelins that had been cantilevered from her shoulders.

Being an American, I first became aware of her through music videos (she developed a recording career) and pin-up posters of the kind one tries to win at itinerant carnivals on humid summer nights.

When you’re 10 years old your aesthetic sense doesn’t appreciate moderation. You respond most strongly to things to which a more refined sensibility would object, saying “too much!” To 10-year-old me, Fox was too much in the way that heavy metal and professional wrestling were too much — she was too much in a way that seemed about perfect.

Revisiting her photos now, her immoderateness is almost upsetting. And is it me or are her proportions a little strange? She looks a bit like a muppet version of Heather Thomas.

Nudity below. Enjoy the long weekend. 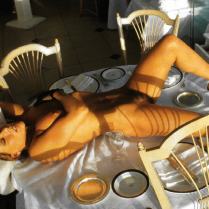 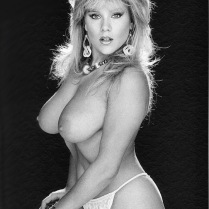 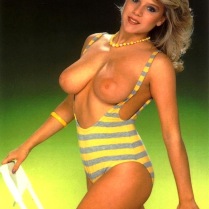 4 Responses to Naked Lady of the Week: Samantha Fox