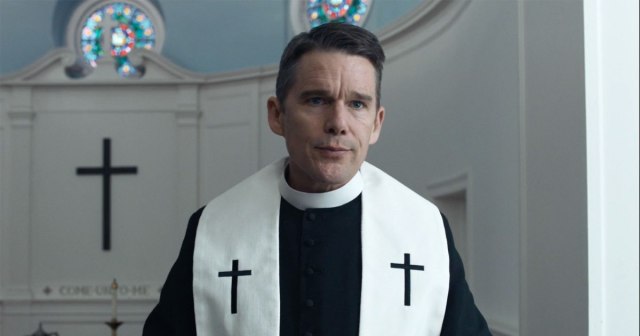 “First Reformed” has cozied up to elite movie reviewers (to the extent that such still exist) through its surface resemblance to the films of Bresson and Bergman. In it they imagine they see an expression of tortured existence and an examination of contemporary values. After all, it’s about a demoralized minister (catnip for the anti-religion set), and it was written and directed by Paul Schrader, who as a young man authored a book on Bresson and Bergman. (Confession: I own the book, but I’ve never read more than a few pages.) Credentials aside, Schrader has none of Bresson’s Ingres-like knack for presenting tamped-down sensuality, and little of Bergman’s ability (sometimes overbearing) to give dramatic form to metaphysical inquiry. He’s rarely managed to suggest a life below the surface of his constructs. More than one critic has called his work schematic. As in the Schrader-scripted “Raging Bull,” the thesis of “First Reformed” is restated with autistic monotony: Ethan Hawke’s depressive Reverend Toller doubts the existence of God, because the world is a bad place. Once this rather tired idea is forwarded, and you’ve acknowledged the nods to “Diary of a Country Priest” and “Winter Light,” there’s nothing to discover or intuit. In order to offer something in the way of surprise, Schrader resorts to grotesquerie: He inflates the suggestion of climactic violence, reminiscent of “Taxi Driver,” until it’s ludicrous; you get the sense that he’s flagellating himself along with the material to prove that he really means it.

Contrary to what you’ve read in reviews, “First Reformed” offers little sense that something spiritual is at stake, perhaps because its director doesn’t recognize that a man might find meaning in religion beyond the base motivation of self-loathing. We’re told that Toller took up the religious life after his son died in one of the Bush Wars. He feels guilt for encouraging the boy’s military career. Thus his service to God is penitential rather than devotional; he’s only in it for the browbeatings. As an alternative to traditional religion Schrader offers the stridency of contemporary political sloganeering. Regardless of your stance on global warming, you may snort when Toller solemnly informs a non-believer that “there is scientific consensus” and that “ninety-seven percent of scientists agree.” Where Trump calls CNN fake news, Schrader takes its talking points as holy writ. In the picture’s final third Toller experiences a mystical epiphany that combines environmental anxiety with an understandable desire to get it on with Amanda Seyfried. The less said of that the better.

Hawke, who is finally being recognized as one of our most sensitive actors, does a fine job of suggesting a man whose inner light has been reduced to a weak flicker. He subtly bows his posture, dulls his reactions, and somehow manages to suggest that his face is on the verge of cratering into his inner nothingness. But the character gives him little to portray beyond that nothingness and a smidge of anger, and the anger is never quite real. Like Schrader’s unfortunate call to violence in the wake of the 2016 presidential election, it’s cosplay anger — a vain declaration of right-side-of-history-ness. According to reports, that outburst was the result of too little sleep and too much wine and Ambien. I fear that Toller, who self-medicates with fervor, is a self-portrait of an artist who has stayed up a little too late, hit the prescription bottle a little too hard, and given indiscriminate vent to his Trump-related anxiety. Maybe “First Reformed” is best appreciated as a figment of Trump derangement.

3 Responses to Notes on “First Reformed”