“These are very large structures, miles on end. They would hold a million people or more each,” explained Bezos to a quiet audience made up of supporters, media, and elementary school robotic students.

He went on to show images of cities, parks, mountains, and waterfalls all in a self-contained rotating space cylinder. He talked about how they could differ in gravity, perhaps affording humans an opportunity to become birds.

“You could have a recreational [colony] that has zero Gs so that you can go flying,” Bezos said dramatically pausing, “With your own wings.”

I find this distasteful if a pipe dream and scary if a real possibility.

For one the concept ignores the irascible nature of real humans, at least in their current version (on which more below).

Bezos set out his utopian vision. Humans will live peacefully together among the stars in these contained O’Neill colonies rather than spreading to inhospitable worlds like Mars.

The idea is radically anti-nature.

“This is Maui on its best day all year long; no rain, no storms, no earthquakes,” he said, “People are going to want to live here.”

Except it is not Maui.  It is artificial.

And then there are the reasons Bezos cites for why the Earth simply won’t do in the future.

Climate change will render the earth uninhabitable?  Where will the resources have to come from to build, maintain and refresh the artificial environment in space?  If we have depleted non-renewable sources of energy and have failed to create new energy sources on earth how will energy be supplied to the floating cities?  And then the argument about too many people on Earth, redolent of Yogi Berra’s crack about a New York restaurant: “nobody goes there any more.  It’s too crowded.”

To me this is a hugely pessimistic idea dolled up as optimistic futurism.  It tells me that the world’s richest man thinks things are going to go haywire on planet Earth, and that it is time for those who can afford it to take to the skies, and to get away.

It is not good if the world’s richest man thinks this way.  For one, his sentiment could be a tell-tale in the wind as far as our elites are concerned.  Get out while the getting is good.  Even if the space cities are a fantasy the idea of elite secession, even just to underground bunkers in New Zealand, is hardly a comforting thought.

And then there is the tremendous misallocation of resources if the world’s richest man decides on a whim to spend untold billions on an impossible vanity project.  One of the problems of the extraordinary level of inequality in our current society is that civil society is hijacked by the wealthy.  Granted, government should not be in charge of every project with public benefits.  Private spending with public aims, as with philanthropy, is generally to be admired.  But when great wealth essentially determines large public outcomes we are, so to speak, in another world altogether.

Worst of all: what if the project is feasible?  Who goes?  Who stays?  How do you avoid a situation like that dramatized in Neil Bloemkamp’s film Elysium,

a film which depicts the “haves” living in a paradise-like space colony and the “have-nots” stuck on Earth dealing with a planet ravaged by climate change and centuries of pollution.

Indeed, is it not likely that at base this is probably what the idea is mostly about in the first place?  If Earth is going to pieces the space city can only be seen for what it is: a redoubt.

Indeed, the pessimistic Elysium view is likely the only way one can come to some optimism about the project itself.

Yes, a parasitic space colony could well draw enough resources from a mother planet to survive.  And yes one could colonize it with Earth’s better people, more likely to behave in civilized ways.

But that probably would not be enough.  For the project to work one would need at least two other preconditions to be met, neither impossible in the long run.

Second, human nature will have to change.  Some may doubt this.

While we could one day change where we live, there’s one thing that cannot be changed—and that’s human nature.

But why be so pessimistic about changing human nature?  We may be uncomfortable with the implications of the surveillance state but maybe . . .  we can get over it?  Past utopias failed mostly on the question of human nature.  But if that nature is malleable, and able to be directed?  Perhaps it won’t take too many generations of genetic tinkering to brew up with a bunch of settlers who truly love Big Bezos. 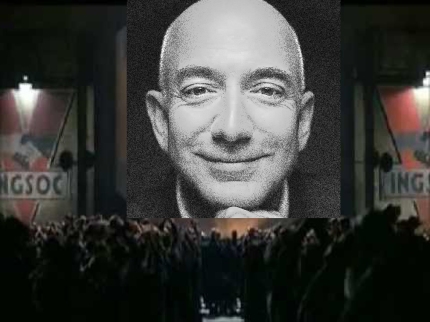