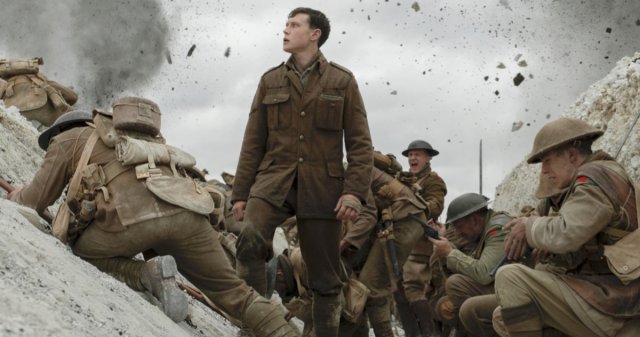 Sam Mendes’s World War I epic is every bit the theme park thrill ride as any Marvel movie. Dean-Charles Chapman and George MacKay play two British army soldiers who must cross hostile territory and deliver orders from Army command to two battalions about to charge into a German trap. Time is of the essence; the message to stand down must be delivered in less than 24 hours. In case this isn’t enough of a hook, the brother of one of the soldiers dispatched to deliver the orders is in one of the threatened units.

My main thought while watching this movie is how contemporary filmmakers seem only able to conceive of World Wars I and II as pulse-pounding spectacles. They aren’t so much war movies as they are action-adventure movies with downbeat endings. The template is SAVING PRIVATE RYAN, not so much the whole movie as its celebrated opening and closing sequences. Here, Mendes moves from one edge-of-your-seat setpiece to another: crossing No Man’s Land, an abandoned German camp that has been booby-trapped requiring the characters to jump blindly through a mine shaft, a French farmhouse in the middle of an aerial dog fight, crossing a river while under sniper fire, a French village that has been set ablaze and is crawling with hostile Germans. Mendes’s movie has more in common with SKYFALL and SPECTRE, his Bond pictures, than it does with something like THE BIG PARADE or STORM OF STEEL.

But it isn’t just Mendes who has fallen into this conceptual trap. Michael Bay’s PEARL HARBOR, Christopher Nolan’s DUNKIRK, and Roland Emmerich’s MIDWAY are likewise not content unless the audience is white-knuckling it. The excellent Francois Ozon WWI movie FRANTZ, released a few years ago, avoided this pitfall, but practically nobody saw it. Are audiences even capable of sitting through a war movie that isn’t at heart a whiz-bang adventure?