Thoughts of a Semi-Self-Quarantiner: When you see a fork in the road, take it.

My last post on the virus has not yet gone viral.  But that will not stop me from piling on.  So here’s another.

I wrote yesterday of a fork in the road regarding differing national responses to COVID-19.  In a conference call to investors Goldman Sachs put it more succinctly than I did:

There is a debate as to how to address the virus pre-vaccine. The US is tending towards quarantine. The UK is tending towards allowing it to spread so that the population can develop a natural immunity. Quarantine is likely to be ineffective and result in significant economic damage but will slow the rate of transmission giving the healthcare system more time to deal with the case load.

This is not the text of the call but a recap from someone who heard it.  So more might have been said. Still and all a few points are worth noting.

–Goldman didn’t take sides, or disparage the Brit response on the face of it. “Natural immunity”, or herd immunity is cited as a possible benefit.

–The call did not seem to come to a firm conclusion on whether the effort to flatten the curve so as not to overwhelm the system will be effective.

–Goldman seemed to be skeptical of quarantine as a general matter.  It is “likely to be ineffective”.  I take that to mean this: if COVID-19 is highly contagious it will be a matter of pay-me-now pay-me-later.  The virus will likely burn through one way or another over time to whatever percentage of the population it is destined to infect. Meantime, quarantine will wreak economic havoc.

Goldman has hardly done a cost-benefit here, but you can see an outline of some key factors that might lead to a useful debate about methods.

In some ways the Goldman treatment of quarantine is odd.  I mean, wasn’t China effective in flattening the curve, and bringing Ro down under 1, with the result that the curve headed south?  That’s not pay-me-now pay-me-later: it is an absolute reduction in cases relative to no-quarantine.

Perhaps Goldman is making a broad assumption that, even if China was successful in bending the curve so that the virus would decay Western nations are just not going to go there.   I quoted a commentator the other day who thinks the West will:

Painfully and messily, behavior change is happening in Europe and America. It will bring the virus replication under control.

An example: today The Boston Globe asks the burning question: “How long should America expect to live like this–separated from friends, co-workers and classmates?”  How long oh Lord how long? Alas the Globe can only answer “experts say they don’t know.”  The horror.

Meanwhile, while it is unclear whether the Brits will stay the course with “controlled burn” (see here and here for what seem to be different viewpoints on British resolve),  the Dutch appear to favor controlled burn.

‘We want the virus to circulate among people who will have little problem with it, while at the same time, protecting vulnerable groups as much as possible. If a big enough group have had the virus, that will protect the vulnerable,’ Van Dissel said.

I thought stiff upper lip had gone out of style in England, and that the Dutch were a classic case of unrestrained tolerance resulting in a nation unwilling to defend itself.  Maybe there’s a fighting spirit there yet.

It is interesting that the two countries pursuing controlled burn are deep behind the Hajnal Line.  That topic is too large to cover here.  Suffice it to say, in summary, that owing to historical circumstances a large part of Western Europe developed a new approach to marriage, one that led to nuclear families, to the fraying of tribal bonds and eventually to the civic-mindedness that we associate with the West.  In fact, the “medieval manorialism” that acted as the engine for these significant broader changes had its birthplace in southwestern England and the low countries, 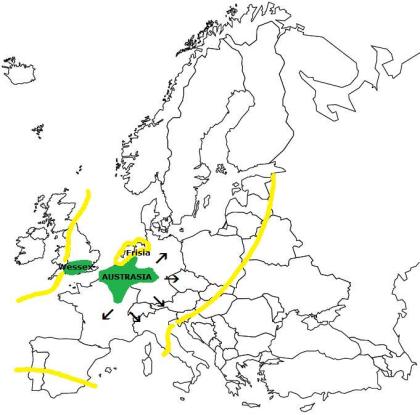 radiating out from the core (in green) over time to encompass the areas bounded by the yellow lines in the map.

Note civic-mindedness does not equate to “communal” or “tribal”.   Those latter values, the norm through most of humanity, lie beyond the yellow lines still.  The areas inside the lines are the exception rather than the rule–an invention, though not one crafted by one hand, or even with clear intent.

The area inside the lines combines individualism with care for the polity, in an abstract way.  The energy that had been lavished on extended family and the tribe was redirected to “nation” or “the people”.

The seemingly contradictory approach to politics and culture that results was noted well by Tocqueville when he visited the United States in the early 1800s: Americans, descended from English stock, were radically individualistic but at the same time joiners and quick to volunteer for the good of the community.

Having these more abstract, universal values in the 21st Century has been a mixed blessing.  No good thing is unalloyed and the Hajnal value set can be a real doozy.  It can work spectacularly well in relatively stable times and when the contradictory impulses are in balance.  But it cannot cope with rapid change, including rapid demographic and cultural change, with the result that the Dutch, in particular, seem unable to define the community they choose to support as anything less than global in scale.

Something’s got to give.  Maybe Hajnal cultures, led from the core once again, will rediscover in this crisis some new balance point that will permit the unique engine of the West to get up a head of steam.  Or maybe they will toss in the towel and concede things are better on the other side of the line.

For example, here an article from Bloomberg (yes, that Bloomberg) suggesting that China’s model is “looking better and better” in the midst of the virus problem.  So should we ditch the West for Chinese ways?

The idea is not totally crazy.  Darwin is, to mix genders in the now fashionable style, a harsh mistress.  Conditions precede ideas and the future belongs to those who show up.  Granted evolution, including cultural evolution, works on us more than we can manage it directly.  But cultures can and do make big bets, and it is wise that such decisions be guided by more than the passion of the moment and take account of the niche in which ideas operate.

I don’t think the West will see the need to revert to the tribalism on the other side of the line that still prevails in most of the world.  That has been unsuccessful in the modern era and will likely remain so.   But China’s Confucian-inflected communitarianism, while hardly the same thing as the Hajnal value set, is in some ways a distant relation–another attempt to transcend historic attachments to family and tribe in favor of something else.  Maybe finding that connection between the West and China will be this century’s convergence opportunity.

Meantime–and there’s always a meantime, dang it–we are left with how best to handle the current crisis, given our distinctive ways.

It may be that it is possible to “crush the virus” but only if the right conditions are present on the ground and in the cultural scope of whoever would do the crushing.  If we don’t have it in us to go full-scale authoritarian–and I hope and expect that is so–Goldman may be right that our version of quarantine will not be effective, at least insofar as an actual crushing is concerned.

If that is the case then our current approach may at best be a half-way measure, capable of delaying, but not reducing, some fixed level of hunger that the virus requires be sated.

But here we have a paradox of a sort.  On the one hand flattening the curve may save the health care system, or overwhelm it less than if the contagion were not managed.  But by spreading the contagion period out we extend the time that the public, especially the vulnerable public, will be exposed to the virus.

I do not mean to diminish the impulse to save the ICU system.  The benefits of the ICU are clear.  Using China’s data 20% of cases move to a serious level where some care is needed.  5% move on to “critical”, and about half that number die.  We don’t know how many of the 20% who recovered would have gone on to the critical level in the absence of care.  And we don’t know how many of the surviving 50% at the critical level did so only as a result of the clinical intervention.  But one way or another ICUs are capable of saving a lot of lives, and even if they saved one or two percent that’s a big deal if the curve is not radically bent, and we end up with, say, 60% of the population infected.

The ICU system can be stretched in terms of capacity but apparently not all that much.  No doubt there will be innovative workarounds to be found stretching care capacity outside of a conventional hospital ICU structure.  But there are limits there too, and it is not clear whether the virus can be slowed enough to remain in safe territory relative to intensive care.  We may just blow through that line one way or another.

Looked at in this fashion it may be that our approach is the worst of both worlds.  We may be unable or unwilling to crush it.  Our softer halfway measures may not save as many lives as we would like to think.

On the other hand: precisely because we may not bend the curve drastically and may only delay an inevitable rate of infection dictated by nature we may end up with herd immunity anyway,  just some months later.  The vulnerable will have been exposed over that extra period of time but if part of the justification for herd immunity is as a hedge against a second year of a more virulent strain we will have gotten there.

So in the end what does it come down to?

Can the vulnerable be sheltered in the storm?

Target tracing, not contact tracing.  Protect ICU capacity not by reducing contagion but by directly limiting the potential exposure of the most vulnerable to the virus.  Each person shielded successfully from the virus cannot show up at the door of the hospital looking for an ICU bed.

Serious, China-style measures but not for the entire public.  Quarantines of the elderly and sick.  Serious shutdowns and monitoring of retirement homes and assisted living centers.

Next up: a modest proposal.

Gainfully employed for thirty years, including as one of those high paid college administrators faculty complain about. Earned Ph.D. late in life and converted to the faculty side. Those damn administrators are ruining everything.
View all posts by Fenster →
This entry was posted in Food and health, Politics and Economics, Uncategorized and tagged coronavirus, COVID-19, hajnal. Bookmark the permalink.

4 Responses to Thoughts of a Semi-Self-Quarantiner: When you see a fork in the road, take it.