So many interesting cross-cuts on the creepshot issue.

Massachusetts passed a law with practically no objection that creates a reasonable expectation of privacy with respect to private parts.  I don’t doubt your average constituent, male or female, thinks it is unseemly for a guy to snap away at a woman with her skirt hiked up inadvertently.  But I doubt it is that simple.  What are some of the cross-cuts?

For one, what about a guy with a skirt flying, the functional equivalent of Paleo’s last shot? 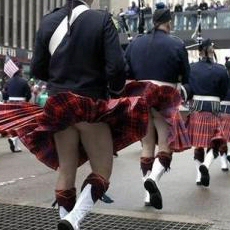 Offensive or just funny?  Should the guy in the kilt have a right to sue?  Was the photography itself intrusive even if nominally legal?

Another possible male-female disparity: butt cracks.  Paleo has asked about whether the taking of butt crack shots would also be deemed creepy.

The taking of guy butt crack shots may or may not be creepy, but the shots themselves can be.

The initial answer might be no.  For one, you could argue that a typical butt crack is not more than a kind of cleavage of the sort that, on top, is made public all the time. 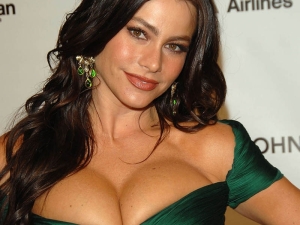 Certainly a guy in speedos is showing a kind of cleavage.

So maybe butt cracks are all right since they only show what any reasonable person might see if one were wearing a bathing suit, which is no big deal.

Maybe, but the element of sexuality now creeps into an otherwise neutral discussion.  Even if both men and women routinely show the first, say, inch or two of butt cleavage, is it troublesome if and when there is a sexual dimension? 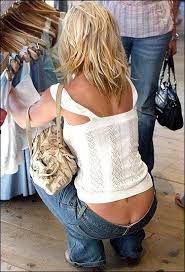 And does that dimension go away mysteriously when the butt in question has little sex appeal? 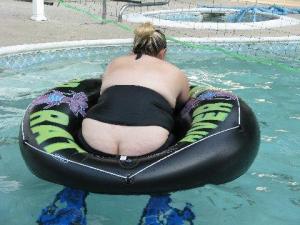 So is this a neutral discussion, or is it inextricably bound up with things that cannot be neatly defined, parsed, analzed and bottled.  Like sex.

Women’s bodies are often sexualized but not all are sexy.  How about this female butt crack shot?

I think she had every chance in the world to cover that but was intent on skinny jeans.  Funny?  Yes.  Sexy?  No.  Should the woman be able to take offense?  Put it to a vote.  My guess is that while a majority of Massachusetts residents would support the new law, they would chuckle at this, and say that this is not what they had in mind, even if a reasonable distinction in law would be hard to make.

There’s also the issue of the intrusiveness of the camera man, or woman.  Cleavage is fine, but are there limits to how close you should get to secure a shot?

or on the angle the shot is taken from?

Take the famous shot of Marilyn.

Is this about modesty?  In a way, yes.  After all, she is, like these women, struggling to cover herself with her dress.

But, like this woman, she is hardly assiduously single minded about the task.

Both modesty and its opposite are present.

So lurking under the surface of all of this is a likely non-rational social undercurrent having to do with sexuality, and in two dimensions:

And if sex is present, expect the irrational.  Very hard to draw legal bright lines when matters sexual are present.  It forces one to be logical when logic is not at the heart of it.

Hard to bottle that.  I suspect that as long as sex will have its contradictory qualities–which is, roughly, forever–we will struggle with clarity on both codes of behavior and neutral laws.

Of course, this is not only about sex.

Gainfully employed for thirty years, including as one of those high paid college administrators faculty complain about. Earned Ph.D. late in life and converted to the faculty side. Those damn administrators are ruining everything.
View all posts by Fenster →
This entry was posted in Art, Photography. Bookmark the permalink.