Creepshot or Not: Bikinis in the Park

When I solicited thoughts and opinions some months ago about whether a snapshot I’d sneaked of a couple of sunbathing cuties in a public park was a Creepshot or not, some visitors concluded A) that it wasn’t, and B) that the reason it wasn’t was that you couldn’t see the girls’ faces. If the girls couldn’t be identified, so what?

Today, in the interests of muddying up the debate, I’m posting a snap of some attractive young women in bikinis, in a park, several of whose faces can be clearly made out. Visitors: Creepshot or not? What’s your opinion? 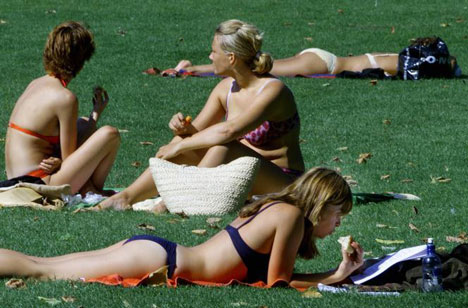 Some questions that strike me as worth mulling over: When women are stripping off and sunning in a public park, how much “reasonable expectation of privacy” are they entitled to? Should it be legal or not-legal to sneak a snap of them? Perhaps it should be considered legal but also rude. Did these women all give the photographer their approval, both to take the pic and to publish the pic? If not, do they deserve to be able to sue, or perhaps just to protest? Should the taking-and-publishing of this photo be condemned?

These are all semi-trick questions because the photo in this case isn’t in fact wank-fodder sneaked off by a creepy old perv like me. Nope: it’s a legit journalistic photograph. (Proof.) OK, let me amend that a bit: it’s a pic, licensed from a respected stock-photo agency, that a legit news outlet has seen fit to use.

My small point here: People have been taking and publishing photos of other people in public since cameras became mobile enough to carry around. People have even been taking and publishing pix of skimpily-dressed women sunning themselves in parks for many, many decades. You may personally have a quarrel with the practice, but it’s been widely-accepted behavior for a long time. And besides: How do you feel about blue jeans at the office? Granted that, in an ideal world, perhaps people wouldn’t wear jeans to the office. But we don’t live in an ideal world and, given that jeans-wearing been accepted in many offices since the 1970s, is it a practice that’s really worth losing sleep over? Perhaps “not losing sleep over it” is a sensible attitude where long-established photographic practices go too.

Depending on several variables, this kind of photography is known as “street photography,” “social-documentary photography,” “photojournalism” or plain-ol’ “candid photography.” In other words: whether or not we’re personally new to these debates, these issues have been hashed-over since a few days after the first street photograph was taken in 1838. The masochistic may want to take a look at this Wikipedia entry. Short version for those in the U.S.: “It is legal to photograph or videotape anything and anyone on any public property.”

Not to be coy about my own opinion (and after 30 years in the media biz I’d be a pretty sad case if I hadn’t sorted out my feelings and ideas about the topic): I’m a “If you’re out in public you can be photographed. Best to be aware of this and act accordingly” person. Basically: I’m a free-speech fan, and I believe that being able to photograph things in public is a free-speech issue. And, just as I’m willing to go to the mat in defense of free speech for writers, I’m willing to stand up for free speech for photographers, even if that speech offends me.  Now, realistically speaking, just as “free speech” in the verbal sense depends on some rules — famously, no yelling “Fire” in a crowded theater — a photographer’s right to snap pix of whatever he pleases in public is enabled and protected by a few rules along the lines of “no sticking your camera up a woman’s skirt.” I do know that.

All that said, and entirely IMHO, photographers should be able to fire away as they see fit, and the rest of us should be aware that, where photography goes, time spent in public is a radically different thing than time spent in private spaces. Don’t whine about it, people. Grow the fuck up and comport yourself in public as though someone might be taking a pic of you at this very moment. Dudez: Think twice about picking your nose, adjusting your balls, or scraping out your ear and inspecting the wax. Ladies: if you want to go out in public wearing a skimpy, floaty sundress and it’d bug you if someone snapped a pic of your bare butt as the wind makes that dress fly up over your hips, don’t stamp your feet at the injustice of it all, wear boy shorts or yoga shorts instead of a thong.

(By the way: there are some subjects, some photos, and some ways of taking and using photos that, while technically legal, will strike many people as rude and / or cruel. The feelings people have about these questions interest me a lot. Fun phenom to ponder in this light: People of Wal-Mart. Often cruel? Sometimes ungallant? Even a little elitist? Sure. But: Funny as hell and a valuable document about Idiocracy today? Just as certain.)

What’s new about today’s Creepshot debates isn’t the fact that a lot of people are snapping pix of each other in public. That’s been happening for well over a century. It’s that, long after many of the issues triggered off by the topic of photography-in-public were settled, a new public debate about it has cropped up. Given that I’m perfectly happy with the legalities as they were settled circa 1950, what mainly fascinates me here is the question: Why should this new debate have arisen at all?

As far as I can tell, two things are propelling this tempest in a teapot.

Tl;dr: Is the ominpresence of digital images and digital imaging devices making people anxious? Or are we raising our girls to be spoiled dodos and tyrants?

As it happens, I’ve been thinking about photography a lot in the past month or so, making visits to galleries and watching docs about the subject. Some interesting movies the curious may enjoy:

Onetime media flunky and movie buff and very glad to have left that mess behind. Formerly Michael Blowhard of the cultureblog 2Blowhards.com. Now a rootless parasite and bon vivant on a quest to find the perfectly-crafted artisanal cocktail.
View all posts by Paleo Retiree →
This entry was posted in Movies, Photography and tagged cheryl dunn, creepshots, documentaries, documentary, movies, photography, robert frank. Bookmark the permalink.

22 Responses to Creepshot or Not: Bikinis in the Park