Fake news is mostly a matter of not covering certain things.  But it can also be a matter of indirection.

At its worst it dives right in and absolutely bathes in the warm waters of dishonesty, naked but oddly unafraid.

Here is a good example of the latter.

As you may have read Facebook has identified another round of serious Russian election meddling.

Wait . . . that’s not quite true.  Facebook’s news release talks only of identifying “coordinated inauthentic behavior”.  It doesn’t discuss Russian origins, or Russia at all, save to say that “it’s clear that whoever set up these accounts went to much greater lengths to obscure their true identities than the Russian-based Internet Research Agency (IRA) has in the past. ”   That is, this round is not the same as prior Russian posts, and Facebook draws no conclusions and does not even offer hypotheses in a clear way.

But of course in our overheated Russia frenzy this has morphed quite quickly into proof that the Russians are behind the removed posts.  You see, in our Spy Versus Spy world it is all a house of mirrors. . . . and disinformation is hard to distinguish from information . . .  and it would be just like those devious Russians to . . .  to . . . .to . . . .

Now that the hook has been set the fish may be more easily reeled in.

And so appeareth on CBS This Morning this Saturday morning: a “senior editor” at the august Atlantic,  Derek Thompson. 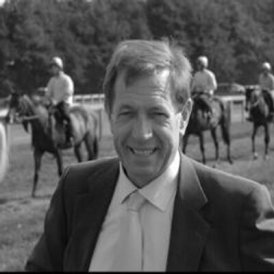 Oops, wrong Derek Thompson.  This one is a Brit racing commentator with a modicum of gravitas. 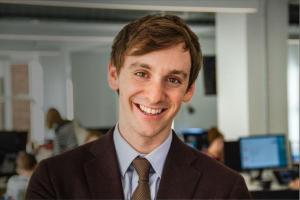 as young and callow as Sarah Jeong, and someone of whom it could be said “there is a boy who needs more friends in life.”  At least that is how he has written about himself.

But Derek is on a roll these days, with gigs at the Atlantic, NPR, and CBS.  He is a featured speaker at the Lavin Agency!  So listen up.  And let’s attempt a fisking as we listen.

Here is the link to the CBS This Morning Segment.

The host, Anthony Mason, introduces the segment in a subdued fashion, mentioning Facebook has discovered some evidence of bad doings but not specifically naming the Russians.  So far it is only the aforementioned “coordinated inauthentic behavior”.

Then Thompson is introduced.  He wastes no time in the set-up.  Before he addresses the offenses in question he declares the Russians to be “the global espionage leader over the last 50 years.”  See how easy it is to declare things to be fact on the television, where no one has to talk back?

He then cuts to Russian culpability straight away.

We believe that this is Russian.  We can’t necessarily prove it.   Why can’t they prove it?  Because the Russians are getting a lot more sophisticated about these disinformation tactics.

Who is the “we” he is referring to?  You would not think he means Facebook, since it  went out of its way to not play up the Russia angle.  The Atlantic?  The Derek Thompson Society?

And then note how he shifts from “we” to “they”.

Why can’t they prove it?

The “they” here can only refer to Facebook, given the context.  So the suggestion is clear: Facebook has not been able yet to determine it was the Russians but they (we?) believe it to be so.  Perhaps Zuckerberg told him this.  There is nothing in the release that sends this message.

And then consider why “they” think the Russians did it even if there is no evidence.

Because the Russians are getting a lot more sophisticated about these disinformation tactics.

The question then turns to content, where it gets even weirder and squirrel-calling turns to outright deceit.

Facebook’s release outlines the relatively paltry nature of the whole operation: 290,000 followers in total, $11,000 in ads.  Moreover, most of the accounts only attracted a handful of followers, between zero and three.  By far the most watched pages were strongly progressive left. 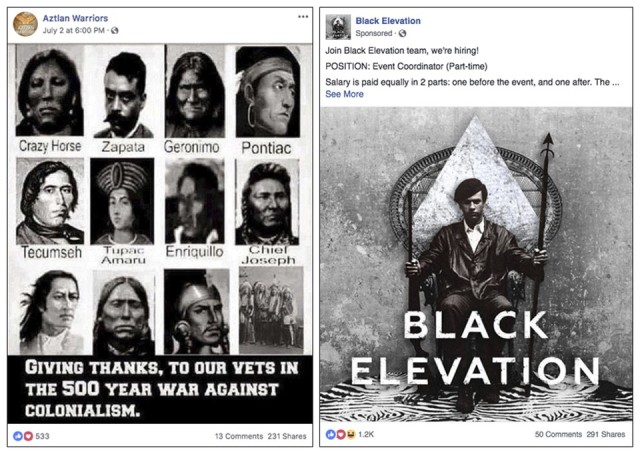 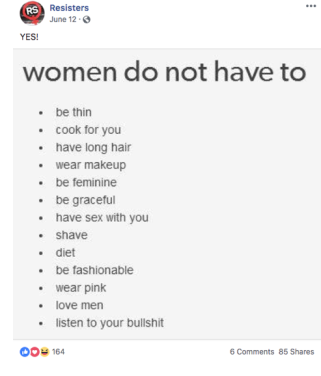 And what seems to be a  New Age themed Mindful Being. 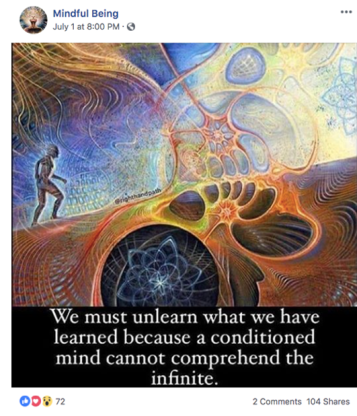 Thompson’s deceit on content is several fold.  First he does not acknowledge that the main accounts purged are supportive of the progressive Left.  Worse, he strongly implies the opposite:

Note well: the main sites with followers contained content written as left propaganda.  But Thompson does a quick switcheroo, and the content is now about immigration and ICE, suggesting a right-wing tilt without coming out and saying so.

Even after this deceit, Thompson is still left with explaining the rationale for posting content that is hardly out of line on Facebook, indeed content ordinary by today’s standards.

Well, the thinking is these pages were using relatively normal content in order to build audiences, so that they could use these informational campaigns in the midterms  November.  So we caught them when they were imitating ordinary conversation.

And note having posited what is at best a flimsy hypothesis Thompson immediately treats it as true despite the lack of any evidence in support.

So we caught them when they were imitating ordinary conversation.

But why?  Another conclusion is drawn without evidence:

. . . they were trying to build an audience so that when the time came  in November they could strike. 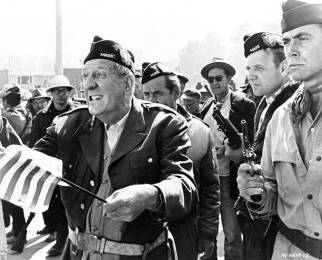 . . . and it prompts a few chuckles today too.  But my reactions are mostly revulsion, fear of the power of the media and a strong sense that Thompson is one pathetic individual.

the lack of evolution of the President of the United States, who continues to offer apologies for Russia . . .

The three talking heads at CBS This Morning, stiff in the expected neutral mode of hosts up till this point, suddenly all start nodding their heads in agreement.

This when Mason introduced the segment with footage of Trump officials making ominous sounds about a Russian interference for which there is no evidence.  And when Facebook’s own release does not pin this round on Russia.

But the narrative would not be complete without valorizing Facebook and denigrating Trump, and no there can be no surprise that this is how the segment ends.

PS  A friend sent along a link to this video recently.  It was sent along approvingly, as being on the correct side of the debate.   It purports to show how those nefarious Russian trolling operations work.

It is “published” by something called Act.TV.  It calls itself a real organization.  But other than a Soros-sounding self-description that I found online I can find nothing about who and what Act.TV is.  No information is given in the video about Act.TV.  There is nothing on the internet about a board, owners, members, incorporation, location, address, phone number, web page.  Act.TV is as mute as the banned Facebook pages.  Yet it must have at least some resources: it put together a relatively sophisticated video–including a narrator with a foreign accent!  Heck, the accent even sounds Russian.

Gainfully employed for thirty years, including as one of those high paid college administrators faculty complain about. Earned Ph.D. late in life and converted to the faculty side. Those damn administrators are ruining everything.
View all posts by Fenster →
This entry was posted in Uncategorized and tagged CBS This Morning, Derek Thompson, Facebook. Bookmark the permalink.

1 Response to Low and Dishonest