The Coronaball Run, Day 3: Nashville to Oxford to Clarksdale to Little Rock

This is the third installment of my series about driving cross-country during the coronavirus crisis. Click here for first post and here for the second post.

On day three we pulled off the 40 and detoured through the back roads of Mississippi and Arkansas. Particularly in Arkansas there was one lane in each direction, semis hauling ass towards you. Hmmm, what would happen if the van broke down out in the middle of nowhere? Probably best not to think about it.

We began the day at Publix in Nashville. Click on the images to enlarge. 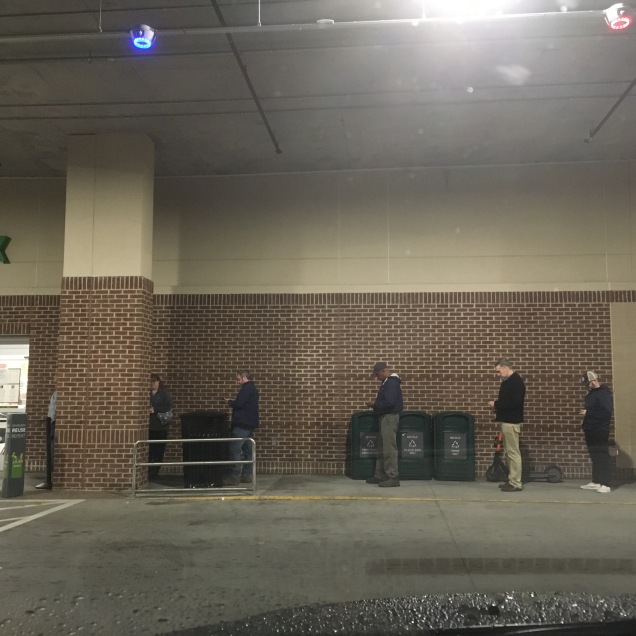 The first time I saw people in a social distanced queue. 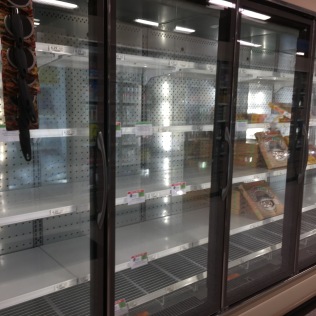 Like every other grocery store, the frozen food had been ransacked.

Not much meat on the shelves, but an employee arrived to restock it after I took this picture.

Breakfast was coffee and a Pub sub. 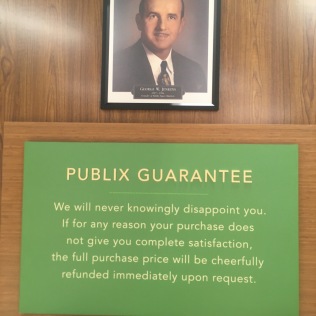 Excuse me, sir, do you have a moment to talk about our Lord and Savior, George Jenkins?

As an Altman fan, I had to see the Parthenon before we left.

It don’t worry me.

The only other people in the park were construction workers who were rehabbing it.

Get this goofy POS outta there. 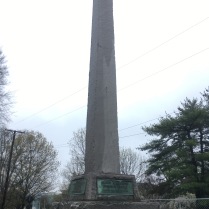 A monument to the founder of Nashville.

That was it for Nashville, we got back on the 40. About an hour outside of Nashville, the city of Jackson, we saw this roadside BBQ stand and had to stop. The ladies running it saw me taking a picture and mugged for the camera. 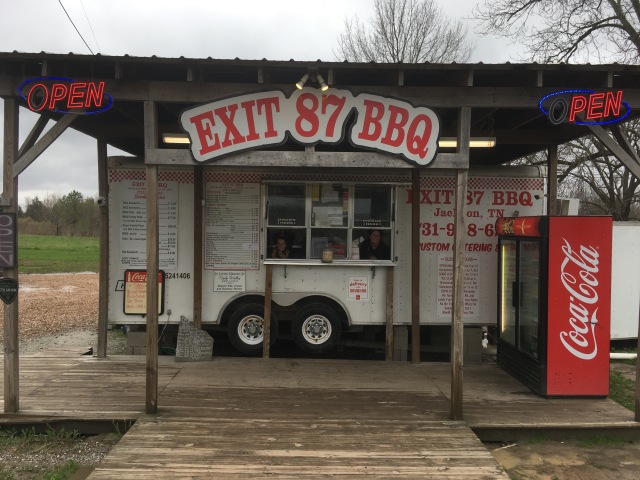 Even though I had just eaten breakfast, I am not one to turn away BBQ. It was pretty darned good. Hey, check it out, its owner was profiled last year in Men’s Journal. 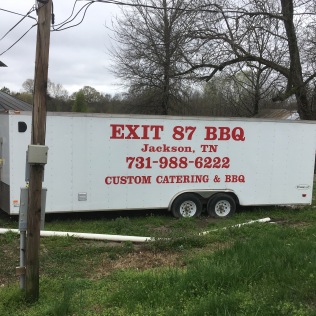 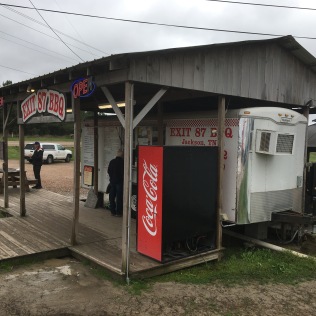 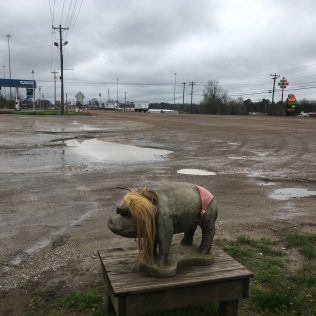 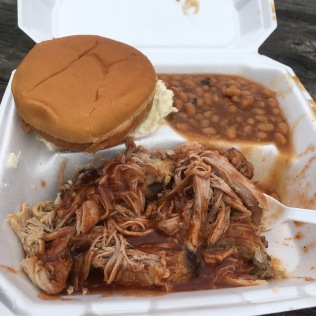 Johnny and June Carter Cash wrote a song about Jackson.

Speaking of music, a quick tangent. We mostly listened to the radio during the drive, taking a break only once or twice for a podcast we had downloaded. I had intended on listening to audiobooks, but I thought the radio would be more evocative. My naive idea was that we’d discover all these quirky country and roots music radio stations to provide the soundtrack. Nope! No matter where we were — east, south, midwest, west — the radio was the same. Same formats, same songs. We heard “In the Air Tonight,” “Hit Me With Your Best Shot,” and “Raspberry Beret” more than a few times. The only time we heard blues music over the radio was in Maryland, on I what I assume was a college station. I remember because we were driving by the NSA. (The station was probably fake and they were just screwing with me.)

Instead of stopping in Memphis, we diverted off the 40 and headed to Oxford, Mississippi before going to Clarksdale. If I was going to be this close to the Delta, I had to see it. First was Oxford, which we got to around lunch time but, given that nothing was open and I had filled up on BBQ, we settled for wandering around the town square. I wanted to buy an Ole Miss t-shirt at the team store but the girl at the shop wouldn’t open the door. She referred me to their website. 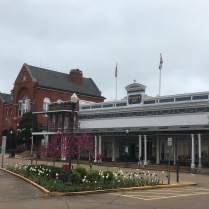 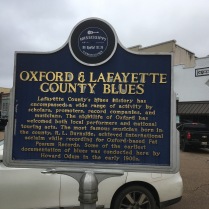 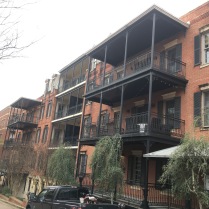 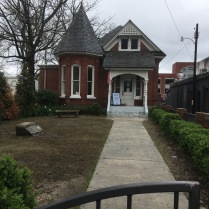 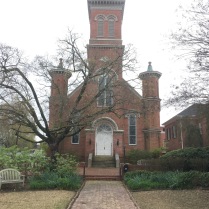 The town is naturally proud of its most famous resident. Faulkner featured the Lafayette County Courthouse in a few of his novels. 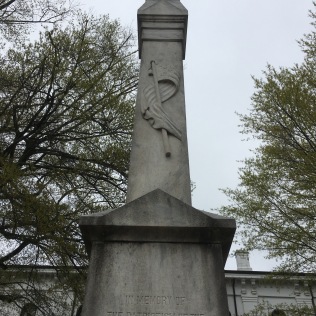 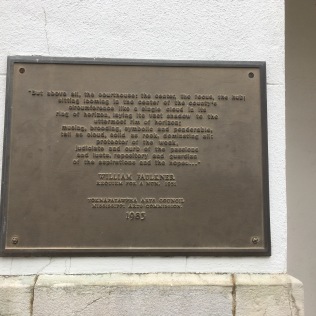 Do people read Faulkner anymore? He seems like one of those midcentury titans, like Fellini, who has fallen off the map. I bet Ole Miss English students get a healthy dose of him, at least. 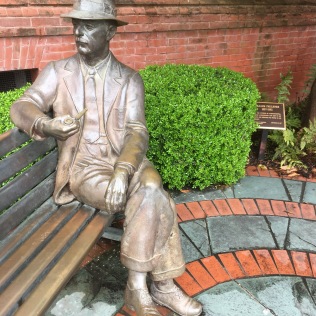 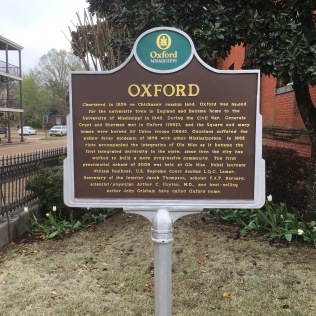 No stores open, no people about, a couple of restaurants with skeleton crews providing curbside service. Just like everywhere else. We left Oxford and headed for Clarksdale. As we approached we saw acres of fallow cotton fields dotted with modern industrial cotton gin factories. It was pretty cool but I have no pictures, sorry.

We pulled into Clarksdale on Martin Luther King Jr. Blvd., which used to be Highway 61. Downtown was empty.

Some cool signs and graphics. 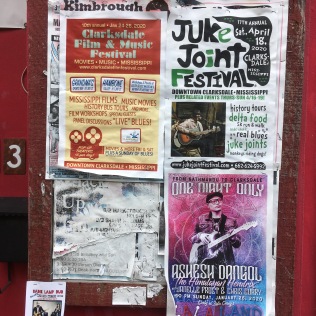 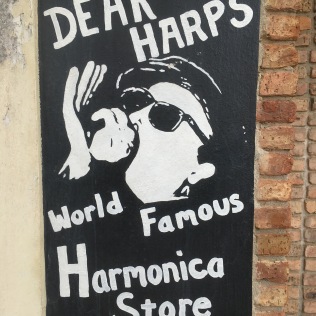 While we were standing in front of Cat Head, a car pulled up. A guy got out and said, “Hey, you guys wanna come inside the store?” Why, yes sir, we do. He introduced himself as Roger, the owner. He unlocked the door and flipped on the lights. A Ohio native, he moved to Clarksdale 18 years ago to promote the blues and Clarksdale. He’s been on PBS, quoted in the New York Times and The Economist, produced documentaries and records. His store, called one of the 17 coolest records stores in America, was full of great books, music, and swag. My brother and I browsed while we all gabbed about the city and the current corona craziness. 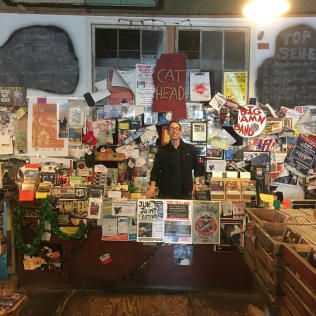 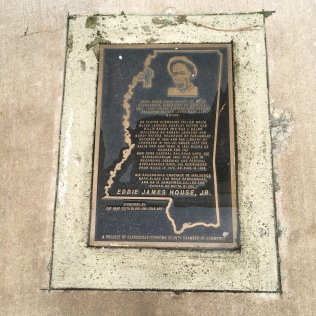 A plaque dedicated to one of my favorites right outside the store.

My brother asked, “Where’s a good place to get something to eat or drink around here?” Roger said, “Well, pretty much the only places that’ll be open are those that are, uh, a little lax about health regulations. Try Messenger’s around the corner.” We bought a couple t-shirts, thanked Roger for his hospitality, and headed to the bar. Damn, it was closed. You know things are serious when the local cool dive has shut its doors.

We wandered around a little more.

Then we headed over to the Crossroads, the intersection of Routes 61 and 49 where Robert Johnson supposedly sold his soul to the devil in exchange for his music skills. The monument is located in the center of a large intersection so we had to bargain with Satan from across the street.

We left Clarksdale via Highway 61. 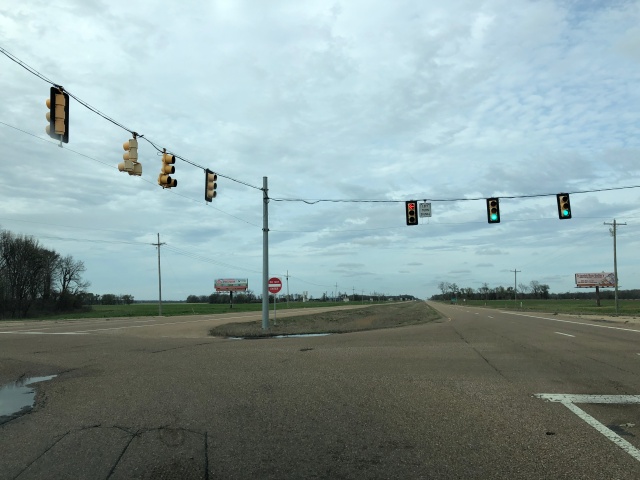 Over the Mississippi and then only a couple hours to Little Rock. We arrived in the early evening, around dusk. The hotels had such low occupancy that we got a suite for the price of a regular room. We dropped off our bags and headed out to the River Market District looking for food.

We saw a few people out on the river front and walking across Junction Bridge. Everyone warily maintaining six feet of distance. 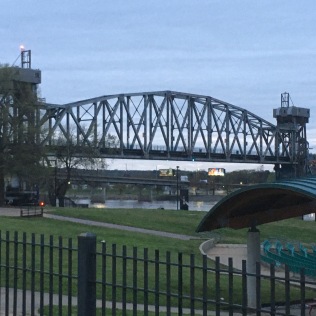 What’s this? Gus’s Famous Fried Chicken? And it’s open? Sometimes the gods bless us. They were 15 minutes from closing but the guy graciously allowed us to order even though making our food would take about a half hour. 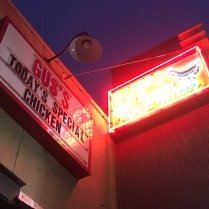 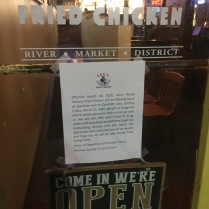 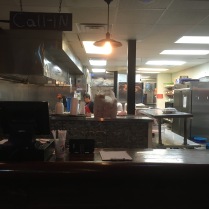 It was the best fried chicken and collard greens I’ve ever had. 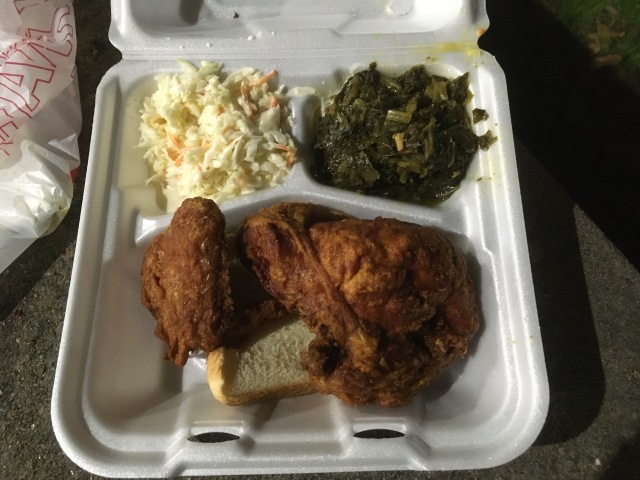 While researching this I was shocked to discover that THERE ARE FOUR LOCATIONS IN LOS ANGELES WTF? I was simultaneously elated and disappointed. Elated because that meant I could get this delicious ambrosia whenever I wanted yet disappointed because I planned on obnoxiously bragging about this place I had been to that no one else had. “Oh, you think that’s good fried chicken? That’s cute. This one time when I was Little Rock…” C’est la vie. God gives with one hand and takes with the other. 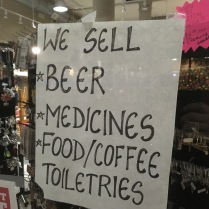 In the next installment we drive from Little Rock to Oklahoma City with a side trip to Fort Smith to hire a U.S. marshal to avenge our father’s death.

6 Responses to The Coronaball Run, Day 3: Nashville to Oxford to Clarksdale to Little Rock